“Wanna Touch the Sap with Me?”

Wanna touch the sap with me?

“Wanna touch the sap with me?” This is the question posed by my 3-year-old every Tuesday and Thursday morning when he gets to Fiddleheads Forest School in the Washington Park Arboretum. It is his first stop before each class and he excitedly invites me or anyone else who is around to join him. The sap he is investigating comes from an extraordinary source, just outside of Forest Grove, the preschool center. A tall ponderosa pine tree whose bark has bubbled and buckled from some kind of fungus beneath the surface creates constant streams of sap pouring down in a slow-moving waterfall from 20 feet up its trunk. The sap is moving so slowly we have found spider webs build in the crevices of the bark with a lone drip suspended in the silk.

I encourage Alvin to dust his hands in dirt before touching the sap to make it easier to remove later, but he doesn’t always remember. That’s ok with me, though, because the fragrant scent of pine sap reminds me of my own childhood in New Mexico, playing in the pine trees and junipers. It also reminds me of why I started looking for an outdoor preschool two years ago to give my son the opportunities I had to explore nature free from the ever-present boundaries and dangers of the urban environment we are surrounded by in so much of Seattle.

When I discovered that Fiddleheads was expanding to a full year preschool located in the middle of the Arboretum, I felt as if the universe had bent around to fulfill this dream! I knew it was perfect when I discovered that forest grove is just across from the ancient Sequoia grove I loved to visit as an undergrad at the University of Washington when I lived near the Arboretum. The colors of autumn have been incredible to view each week driving to the school and the wide variety of leaves, berries, nuts and seed pods seems unending. After drop off or before pick up, I make some time for myself to enjoy the smells, sounds, sights and sightings alongside my child, so we can share the magic of the of the forest together. (I’m sure I saw a coyote tail bouncing in the brush one day!)

Occasionally, I will hear the sounds of little voices adventuring along as I am on my own walk and feel their excitement and wonder well up inside of me. I love to watch from afar as they gather sticks to build a “fire” or leaves to pile up and roll in and I inwardly thank all the forces, voices and advocates who came together to create this fantastic program.

Although my favorite sequoia grove is protected by a fence now to protect the fragile roots, their giant trunks and strong presence are a perfect example of why the Arboretum is such a treasure for Seattlites of all ages and I hope there will be many more classes of preschoolers and homeschoolers and every other age of schoolers out in appreciation all year round in this wonderous place!

(Karah Pino, MAcOM is the delighted parent of a Fiddlehead’s Forest student, the social media coordinator for the Women of Wisdom Foundation and she manages the blog Unwind your Mind and Get Creative!

Entering a more ‘zen’ mindset could be as easy as taking a walk in the park, according to a small new study.

New research from scientists at Heriot-Watt University in the U.K. conducted mobile brain electrical activity testing on volunteers to find that the brain enters a meditative state when going through green spaces.

The findings have “implications for promoting urban green space as a mood-enhancing environment for walking or for other forms of physical or reflective activity,” they wrote in the study, published in the British Journal of Sports Medicine.

The study included 12 healthy adults who walked through three kinds of environments in Edinburgh while being hooked up to mobile electroencephalography devices (which tracked their emotions). They took a 25-minute walk through a city shopping street, through a green space, and on a street in a busy business area. The mobile electroencephalography tracked emotions including frustration, meditation, short-term and long-term excitement, and engagement.

Researchers found that feelings of meditation were the highest when the study participants were going through the green space, as well as less frustration, long-term excitement and engagement.

The New York Times reported that the findings don’t mean the green space triggered spacing out — rather, the engagement required to walk through a green space is more “effortless,” study researcher Jenny Roe told the publication.

“It’s called involuntary attention in psychology. It holds our attention while at the same time allowing scope for reflection,” Roe told the Times.

And taking a walk in the park or a hike outdoors is good for our brains in more ways than one — the University of Washington reports that spending time in nature helps to conquer mental fatigue and even boost cognitive functioning.

For more benefits of being outdoors, click through the slideshow:

via Walk Through Green Space Could Help Put Brain In State Of Meditation, Study Finds. 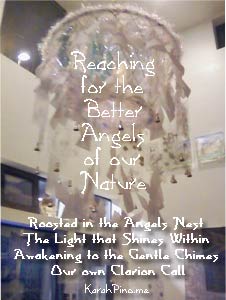 I began this piece with the idea that our better nature, the nature of humanity in harmony with the natural world, is just a decision away.  All we have to do is reach for the truth in ourselves.

Origami Artist, Karah Pino graduated from the University of Washington with a BA in Interdisciplinary Visual Art in 1998 with experience in Jewelry and other Metalworking, digital production, graphic design, and paper arts.  She is currently an Artists in Residence at Mind Unwind Gallery,  teaching paper arts to children and meditation to adults with a focus on Origami and Creative Collaborations!