Mindfulness meditation is a practice that cultivates awareness of the present moment and clears the mind of other thoughts, often accomplished by non-judgmentally focusing attention on the physical sensations of breathing or other experience as it occurs.

Top-level managers appear to be highly interested in mindfulness at the moment, as evidenced by recent sessions on meditation at the World Economic Forum in Davos, Switzerland, and a cover story about mindfulness in Time magazine.

Chief executives of major companies such as Ford Motor, Salesforce.com and Tupperware have publicly touted the benefits of meditation. Organisations as varied as Google and the United States military have instituted internal mindfulness-based training programmes for their employees.

At Insead – in Singapore and abroad – professors incorporate meditation into executive and MBA courses.

Although there is a risk that some may write off mindfulness as pop psychology or a management fad, it is more than that.

The practice dates back more than 2,000 years to the Pali canon of Theravada Buddhism, and Western clinical psychologists have used secular mindfulness meditation training to effectively combat anxiety and depression for several decades.

There are many articles in academic journals, particularly in the fields of cognitive psychology and neuroscience, that document the benefits of meditation.

Meditating regularly increases how much people habitually focus on the present moment relative to the past and future at times when they are not meditating, a tendency psychologists call trait mindfulness.

Research has linked increased trait mindfulness to increased positive emotions and decreases in several forms of negative emotion, such as rumination, depression, anxiety and anger.

Recent research has also found that even a single eight to 15-minute session of focused-breathing mindfulness meditation can cue a brief state of mindfulness, which leads to changes in emotions and behaviour immediately afterwards.

For example, a state of mindfulness has been found to reduce short-term negative emotions, distraction from the task at hand and the impact of negative information on attitudes and persistence. 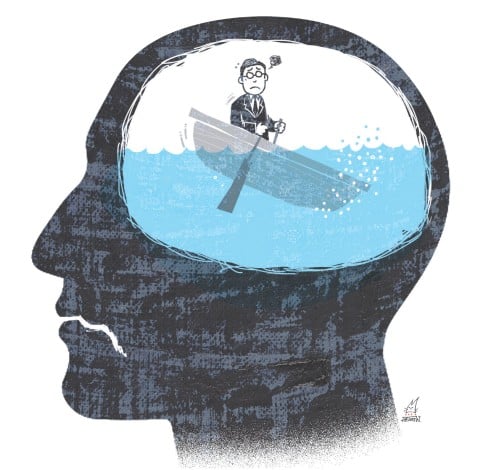 In other words, we were interested in whether mindfulness meditation could reduce what economists call the sunk-cost fallacy or the sunk-cost bias, which is the tendency to continue an endeavour after having already invested time, effort or money.

Our key finding is that mindfulness meditation increased resistance to the sunk-cost bias, and this occurred in a two-step process.

First, meditation reduced how much people focused on the past and future, and this psychological shift led to less negative emotion. The reduced negative emotion then facilitated their ability to let go of sunk costs.

Our findings can help managers and businesspeople, because there are so many cases in which the sunk-cost bias can destroy value.

For example, people often hold on to losing investments for too long. Businesses often continue with projects even when the costs increase dramatically or their product is less unique or marketable than it initially appeared.

Governments often continue fighting wars they know they cannot win. Managers can be reluctant to fire massively underperforming employees who they hired with great expectations.

In all of these cases, resources are wasted that could have been used more productively in another endeavour, whether that is a more promising investment or project, peacekeeping efforts, or a new hire who is a better fit for the organisation.

Our advice is that when people need to make decisions about whether to change course, that is a great moment to step back, clear one’s mind by meditating, and approach the decision again.

A potentially helpful question to ask oneself is: “Would I continue this endeavour because I truly think it is the best decision in light of all available evidence or because I am reluctant to let go after having invested so much?” As to how to briefly meditate, there are many excellent free recorded meditations available online, such as those from freemindfulness.org

There are also meditation classes and trainers in all major cities and excellent books on the subject by Thich Nhat Hanh and Jon Kabat-Zinn.

More broadly, our findings suggest that even people with little experience meditating can use mindfulness meditation in small doses at times when they need it, such as when experiencing excessive negative emotions or stress, or when thinking too much about the past or future.

For these reasons, mindfulness should be more than a passing fad, and instead a tool people keep at their disposal for use when it can be helpful.

People and corporations should seriously consider the role mindfulness meditation can play in mental and emotional well-being, task performance and decision-making.